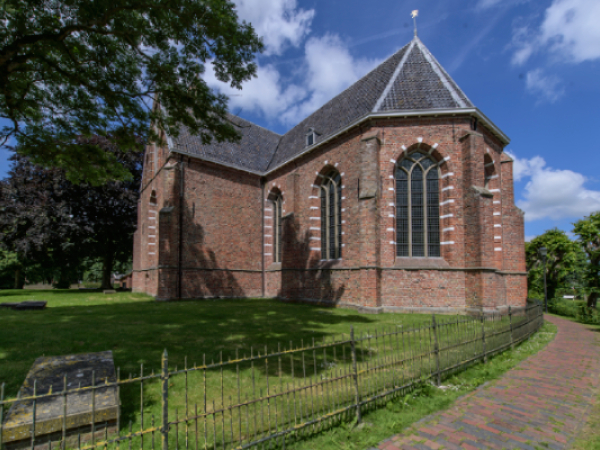 This 15th century brick cruciform church is one of the finest examples of Late Gothic ecclesiastical architecture in the province of Groningen. Here and there the walls are made of tuff stone, probably from the original Romanesque church. The splendid interior boasts many outstanding features: 16th century murals and vault frescoes, an epitaph in honour of Egbert Onsta and an aumbry made of yellow Bentheim sandstone. The north entrance door dates from circa 1500 and is one of the few remaining medieval doors in Groningen. The tower was built in 1487 and in the 17th century a dome was added in which a carillon was later installed. The tower itself houses a bell dating from 1520. Both carillon and tower were confiscated by the Germans during WWII, but were returned to the tower in 1946.
The church is rented by the Protestant congregation Middelstum, Toornwerd and Westerwijtwerd who holds worship services there. The church in Middelstum is part of Het Grootste Museum van Nederland, the 'largest museum in the Netherlands'. The most beautiful churches of the Netherlands as one museum. Other churches in Groningen that are included in this museum are the churches in Midwolde, Krewerd and Pieterburen.