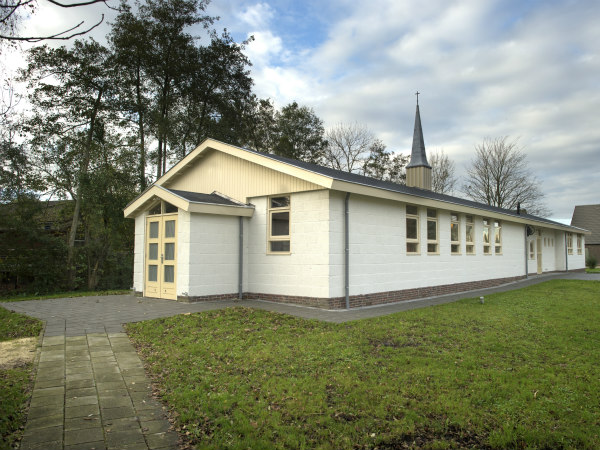 In 1960 a new church was built in Appingedam near a residential area that had been especially developed for Moluccan people. This Moluccan church has remained relatively unchanged since it was first erected. As it was intended to be 'semi-permanent', the building bears a strong resemblance to a barracks except for its slender ridge turret, which is topped by a steel cross. The interior is striking, with a supporting structure of exposed wooden rafters. The simple wooden pulpit and baptismal font were made by builders Niehof and Hund from Appingedam. The church bell, on the eastern wall, was cast in 1960 by the firm of Van Bergen from Heiligerlee.
The church is used by Geredja Indjili Maluku (the Moluccan evangelical church) and by Noodgemeente Protestant Maluku di Belanda maart '53 (Moluccan Protestant church). Since November 1970 the church houses an information centre offering information on the history of the Moluccan community in the Netherlands.